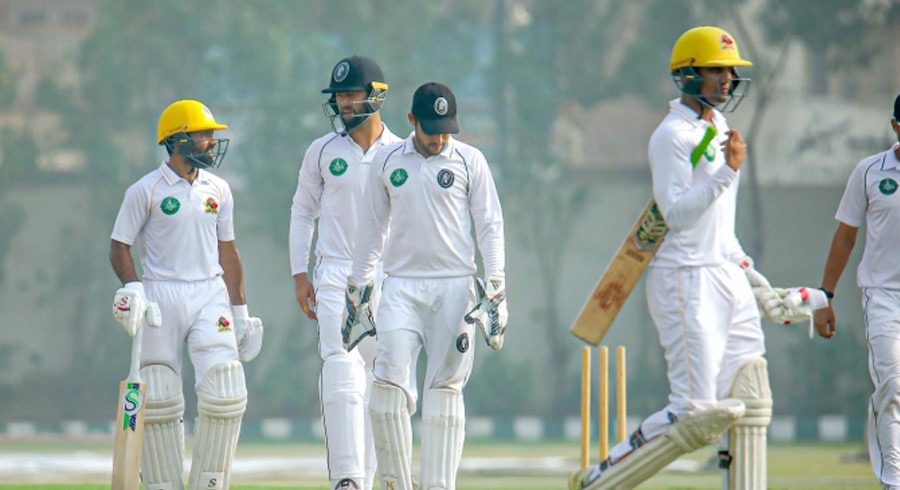 34 wickets fall on day one of seventh round Quaid Trophy fixtures. Irfanullah Shah took five for 33 and Sajid Khan grabbed three for 66 to justify Khyber Pakhtunkhwa’s decision to bowl first

Bowlers set the stage for three more results in the first-class Quaid-e-Azam Trophy when 34 wickets fell on the opening day of the seventh round fixtures, which commenced here in Karachi.

Irfanullah Shah took five for 33 and Sajid Khan grabbed three for 66 to justify Khyber Pakhtunkhwa captain Khalid Usman’s decision to take the option of bowling first at the State Bank Stadium when they combined to bowl out fifth-placed Sindh for 229 inside 82 overs.

Asad Shafiq was Sindh’s top-scorer with a 111-ball 60 with nine fours, while opener Sharjeel Khan slapped nine fours and a six in a 78-ball 57.

When play ended early due to fading light, second-placed Khyber Pakhtunkhwa had reached five for no loss.

At the UBL Sports Complex, Hasan Ali continued to impress with his fitness when he inspired bottom-placed Central Punjab to dismiss leaders Northern for 243 in 57 overs.

Hasan Ali, who has missed international cricket this calendar year due to injuries, returned figures of 15-2-48-4 and was well supported by Bilawal Iqbal (three for 91) and Ahmed Safi Abdullah (two for 31).

After electing to bat first and slipping to 63 for five, Northern were first rescued by a 97-run sixth wicket stand between Mohammad Nawaz (50, 6×4, 97b) and Hammad Azam (47) before Asif Ali’s whirlwind 39-ball 72 knock, comprising nine fours and five sixes, lifted Northern to 243.

At the draw of stumps, Central Punjab had reached 49 for no loss from 23 overs.

In front of the broadcast cameras at the National Stadium, 14 wickets fell on day one of the four-day match between third-placed Southern Punjab and fourth-placed Balochistan.

Electing to bat first, a 62-run last-wicket partnership between Zahid Mahmood (45) and Ziaul Haq (16 not out) carried Southern Punjab from 194 for nine to 256 all out in 79.5 overs with other notable contributions coming from Salman Ali Agha (50) and Zain Abbas (40).

However, Southern Punjab hit back hard when Aamir Yamin produced a sensational last-session spell to leave Balochistan tottering at 16 for four. Aamir grabbed three for four in four overs, while Mohammad Ilyas picked up one wicket.

Scores in brief (day 1 of four, round seven)

At UBL Sports Complex, Northern won the toss against Central Punjab and elected to bat first

At the National Stadium, Southern Punjab won the toss and elected to bat first against Balochistan