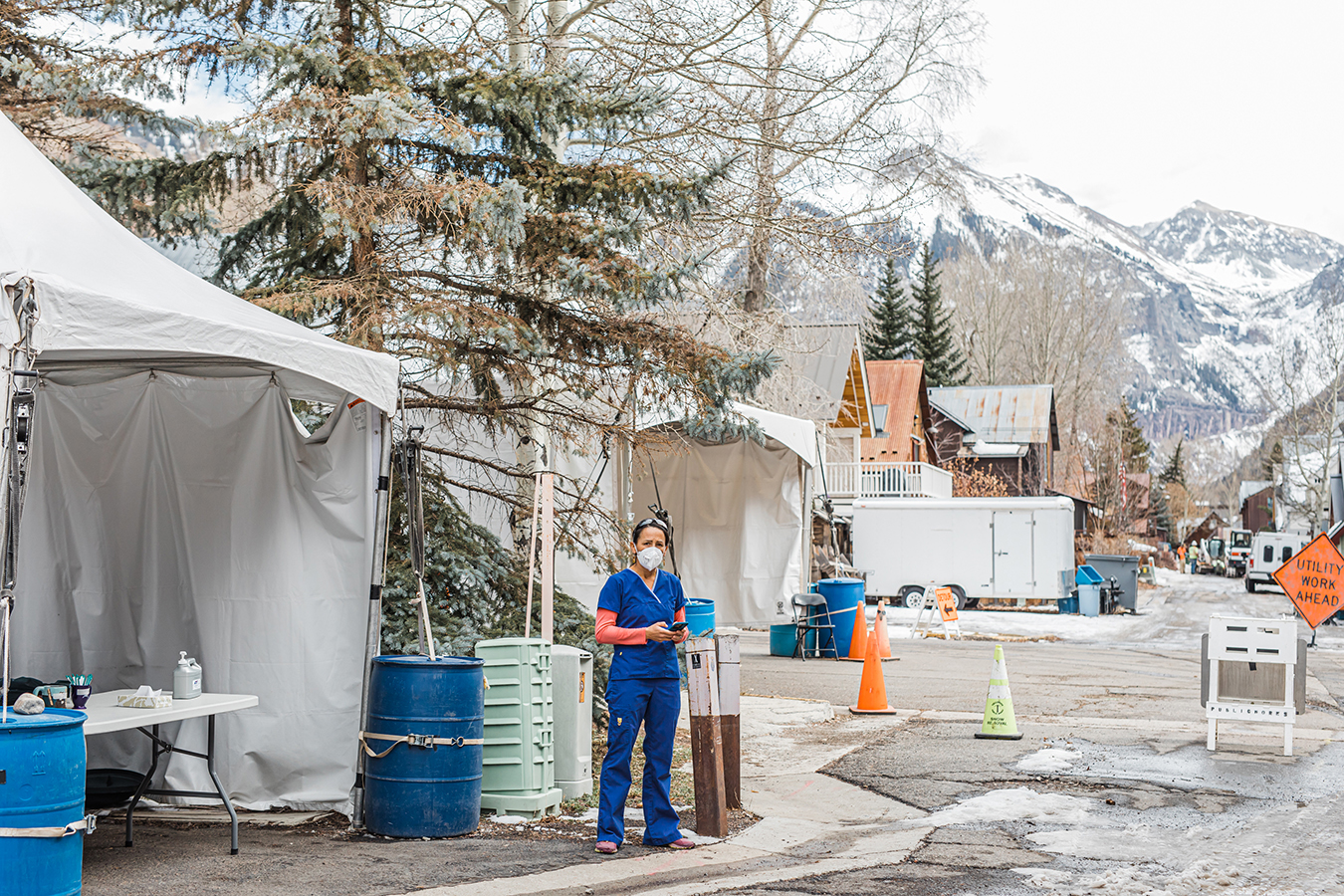 Tracking COVID’s Spread Inside a Tight-Knit Latino Community. Early in the pandemic, Ximena Rebolledo León, a registered nurse at Telluride Regional Medical Center in southwestern Colorado, needed to find everyone who’d been in contact with a sick Latino worker whose boss had told him he would lose his job if he didn’t show up.

The man had gone to work and infected four co-workers, all Latinos, with COVID-19 — so Rebolledo León then had to track down their movements to determine who else had been exposed to the coronavirus in the wealthy ski resort community.

“I ended up calling 13 different families, and I put a total of 85 people in isolation or quarantine,” Rebolledo León recalled.

COVID-19 has also highlighted how essential those immigrants are to their communities. While Telluride is known for its glitzy resort tucked into the mountains, the place functions because of the workers — many of them first-generation immigrants — within the surrounding San Miguel County. When the medical center implemented new COVID-cleaning protocols, it fell to the cleaning staff of Latinos. Grocery stores, restaurants and many other businesses remained open only because their Hispanic workers continued to come to work.

“They are the backbone of what makes this town go round,” Rebolledo León said.

That’s why Latino front-line workers in Telluride and across the country suffer some of the greatest consequences of COVID-19. Hispanic people in the U.S. face higher rates of infection than the general population. And while they make up about 17% of the population, they have accounted for 24% of COVID deaths.

San Miguel County had 267 confirmed cases of COVID-19 as of Dec. 6, but no deaths. Hispanics account for about 11% of the population of roughly 8,000 but 23% of the cases from March to August.

Even so, it took weeks as the pandemic unfolded for the county health department to provide information about the virus in either Spanish or Chuj, a Mayan language spoken by many of the county’s residents from Guatemala.

“We were in crisis mode, and I think one of the first things that falls by the wayside is health equity,” said Grace Franklin, director of the health department. “It took a little bit of time for us to check back in and say, ‘What are we missing? Who are we missing?’”

So public health officials, like those in Telluride and the surrounding county, are leaning on trusted voices such as Rebolledo León from within those immigrant communities to track and contain the virus, and to help vulnerable people access the care and resources they need.

“Trust is a huge factor,” said Maggie Gómez, deputy director of the Center for Health Progress, a Denver-based health advocacy group. “When you show up in a Latinx community in a suit, and you’re knocking on the door and they don’t know who you are, they can tell you’re not from there — they’re going to be pretty suspicious.”

Many of the people Rebolledo León was calling hadn’t received even the most basic information about COVID-19 in words they could understand. She said they hadn’t gotten clear messages on why they had to stay home if they weren’t feeling sick or why a negative COVID test didn’t mean they were in the clear. She was calling homes every morning, checking to see if anybody had developed symptoms, or needed food or other support to remain in quarantine. She gave them her personal cellphone number.

“I wanted them to have access to a nurse,” Rebolledo León said. “So it became a round-the-clock job.”

A woman with diabetes called asking whether she’d be safe working in a restaurant. A house cleaner wondered if it was safe for her to clean if the owners were at home. They would call her late at night, wondering if they should go to the emergency room when having trouble breathing.

Whenever new information became available, Rebolledo León, who emigrated from Mexico more than 20 years ago, recorded Spanish-language videos on her phone, posting them on Facebook and texting them out. She doesn’t speak Chuj, but the health department hired an interpreter and posted a COVID video in Chuj on its website.

In the midst of the COVID-19 pandemic, public health officials are leaning on trusted voices in the community, like Ximena Rebolledo León, a registered nurse at Telluride Regional Medical Center in southwestern Colorado, to track and contain the virus. (ABIE LIVESAY FOR KHN)

The videos went viral among the Latino communities in the county. So much so that many people Rebolledo León had never met recognized her as Nurse Ximena from the videos.

But by summer, Rebolledo León was overwhelmed and had to step back to focus on her work at Telluride Medical Center. The county health department in April had hired Dominique Bruneau Saavedra, an architect who emigrated from Chile in 2016 and had been working at a local nonprofit. Bruneau Saavedra took over the bulk of contact tracing among Spanish-speaking residents.

In one case, Bruneau Saavedra asked four Latino men to isolate. One lost his job because of it. Many of the people she contacted worked multiple jobs. That expanded their potential contacts.

Housing intended for four people often sheltered six or seven, she said. Some homes had a single bathroom, making it hard for one person to isolate from the rest of the household. For many immigrants, she said, their entire social circle is the people at work. When asked to stay away from their jobs, they may not have other friends outside their home who can help with food or other needs.

Bruneau Saavedra also discovered that many who worked multiple jobs used different names or nicknames with different employers. In trying to track possible cases, at times she discovered two people on her list were one and the same, having the same cellphone number. But she also found households where multiple residents shared a single number.

Bruneau Saavedra said that, when she called non-Hispanics, she noticed a contrast in their level of concern. Some chose to isolate by going camping alone in the woods, she said, almost like a vacation. For low-income immigrants, isolation can be an economic and legal crisis. In Colorado, an estimated 1 out of 3 immigrants are undocumented.

While social services could help with food and other assistance, the agencies needed to know Social Security numbers, immigration status and who else lived in the home. Those were nonstarters for many who had status issues or undocumented family members living with them.

“It’s been a fight every single step,” Rebolledo León said. “If you’re undocumented in this country, you are aware that the information you are sharing could put so many others in serious problems.”

Telluride is small enough that when one person is infected, it’s not hard to find connections to half the town.

On the other hand, Bruneau Saavedra said, the county is lucky because it is a small community.

“It feels like contact tracing is manageable and is possible, unlike in an urban infrastructure,” Bruneau Saavedra said. “Everybody knows each other.”